CYCLING FROM CANADA TO CENTRAL OREGON

It was a bit unceremonious as my lovely wife (and cycling domestique) left us at a gas station parking lot just a stone’s throw from the Canadian border. And we felt a brief sense of abandonment as we watched her drive swiftly to the freeway onramp heading back toward Seattle. That didn’t last long as Lee and I felt in total control of our destiny again, with nothing to do but pedal our bikes for hours and arrive at our destination before dark.

This was part two of our west coast adventure. In 2015, Lee and I, friends since high school, along with our 3rd Musketeer, Rob, plotted to ride the entire west coast in three segments. That year the three of us rode from the Golden Gate Bridge to San Diego, some 650 miles later. It was a perfect trip – California coastline, surf, beach cities, and bronzed beach bodies to keep our attention. Our approach was light and fast – typically 100 miles per day on our lightweight road bikes, with full gear support from the very supportive Mrs. J. We even threw in one 200 mile day, starting at 4am by headlamp, riding through Malibu, Newport Beach, and eventually to Rob’s Jacuzzi and refrigerator in San Clemente. 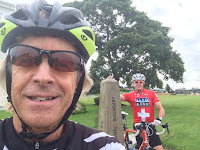 But this was 2016, and part two begins at the Canadian border today, and ends at the central Oregon coast some 600 miles away. The demands of life and a career prevented Rob from joining us this year, so we Two Musketeers looked around the gas station for a road that would lead us, well, south! But not before exploring the Canadian border, which was literally 100 yards behind the gas station at “Peace Arch Park”. A big arch between the north and southbound lanes of I5 signifies the friendship of our two countries, and a few border markers make a great backdrop for photos. And now, it’s time to ride!

We’re north of Seattle, on the coastline of the straits and bays between Washington and Vancouver Island. We didn’t plan to “island hop”, as is common bicycle recreation here, but one island and a ferry was mandatory. So we rode along the coast and on to Whidbey Island, where we could take the ferry to Port Townsend, our destination for the day.

The details of riding include scenery, hills, and very long, flat stretches of smooth road with a nice shoulder. These flat stretches are where we can pedal hard and fast, take turns in front to create a draft, then rotate to the back to rest in the draft. We rotate “leads” every two minutes or so. This fast-paced coordination is really fun, and requires some focus to stay about 24” behind the wheel of the leader. We cover a mile in about three minutes. We like this!

The Washington coast is shallow, and we pass oyster beds, and oyster farms everywhere. There are huge piles of crushed oyster shells waiting for disposal. Not at all like the beaches of Southern California. And people just seem to live on the beach. Modest homes and an occasional double-wide – far from the exclusive coast neighborhoods of California.

We’ve mapped out the ride in general, but we don’t really know what to expect until we get there. A little help from Google Maps shows us alternate local roads, and we almost always choose the road closest to the water (except residential roads). It seems every choice we make is perfect – smooth riding and beautiful scenery. We see F-16’s landing at the military base on Whidbey Island, and arrive at the ferry by late afternoon. Arriving at our motel in Port Townsend, Mrs. J has prepared a cheese and meat spread for us, and our first tasting in our week long assignment to taste-test Italian Prosecco’s (sparkling wines).  It’s a perfect way to end our first day on the road. 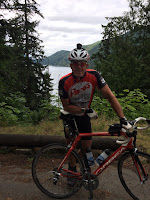 Each day we spend about 7 hours in the saddle. Through Olympic National Park we see the beauty of the Olympic Peninsula, but we are distracted by the unending parade of logging trucks. Lee starts counting, and we are passed by over 50 of them on day two, on our way to Forks, WA. Another beautiful day for riding, until mile 60 when it begins to rain. It’s a warm, steady rain, so we just continue to ride, until it eventually downpours to the point we put on our lightweight windbreakers to stay warm (but not dry). It’s kind of fun riding in the rain, but we work to avoid the painted lines on the road which become very, very slick.

Mrs. J (her name is Pam, by the way) calls me around 1:00, sort of asking if the motel I booked might look like a crack house. I explained that the photos weren’t so nice, but a crack house? It was the only motel available on Hotels.com when I booked it. We agreed to take the loss if Pam could find a more suitable motel that met her comfort standards. The new hotel was pretty basic, but no crack-heads here.

The Prosecco ritual became something we all looked forward to. And, by the way, our favorite was Zonin Prosecco, available at Trader Joe’s. But something about drinking a sparkling wine after 100 miles in the saddle just makes it so much more refreshing.

The last 4 miles into Astoria, our entry into Oregon, was on a long, narrow bridge. Bridges are windy, and tricky riding, and this one ascends about 600 feet in the last half-mile. And Lee thinks we should go faster. I stick to his wheel, our speed increases, as does my heart rate that shows on my monitor. The last 100 yards my legs and lungs are burning, Lee is still accelerating, but knowing it’s the end of the ride and we’re just minutes away from our next bubbly makes it worth the extra effort. And it is, as our room overhangs the water in the marina, and we can see in profile just how steep that bridge is. And tonight a special toast to Rob, who should be with us, and we miss him, especially tonight. 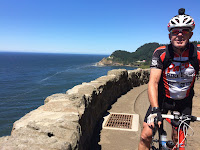 Oregon roads are much smoother than Washington chip-seal roads. And Oregon coastal cities are more charming and “beachy” in a way we like. There is still a lot of oyster shucking going on, so I start ordering the local fare at dinner each evening. Oysters in a shot glass with vodka is a good way to go.


A tail wind helped us for the next couple of hundred miles, which makes for really, really enjoyable riding. But nothing helped so much as a wonderful partnership of riding adventure between Lee and I. Friends since high school, and roommates in the 80’s, we have a lot of history to discuss. It’s fun to recall “back then” when we were young, optimistic, very naive, and had no idea how our lives would turn out. We both acknowledge that in a lot of ways things are better than we might have hoped for. These rides give us time to talk a lot  – about why we ride (an ongoing conversation), the major choices in our lives that led us to where we are, people in our lives that have made a difference, and plans on how we want to spend the next 20 years!  We finish each day with a lot of gratitude: for our good health, our lasting friendship, and our remarkable families. I love riding with Lee! 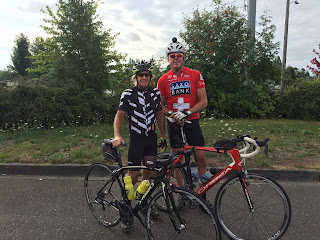 Just a guy having too much fun to grow up.